It’s probably true to say that there are those working in the film industry today who cannot remember a time before Chroma key was in use.

What is definitely true to say is that some of us here at Soundstage Studios are sufficiently long in the tooth not only to remember a time before Chroma key, but also a time when you had to get off the sofa and actually walk over to the TV in order to change channels. (Mind you, there were only three channels available so we didn’t have to do it that often.)

And that means that we can also remember a time when stop-motion animation was right on the cutting edge.

Technology has moved on at a continuously accelerating pace since then and Green Screen and Blue Screen is now so commonplace that it’s easy to forget what a revolution it engendered in both film and video making. It’s only one step in the long evolutionary process of Special Effects but a significant one nevertheless.

Ever since the dawn of moving pictures, innovative film makers have been experimenting with ways in which to bend reality and to create believable illusions that have the power to leave their audiences awestruck. 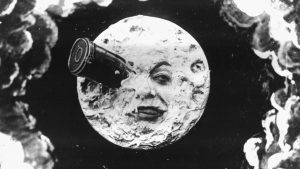 As far back as 1902 (which none of us at Soundstage Studios remembers, even though one or two of us look like we might) George Méliès, originally a stage magician, was using miniature models and a form of stop-frame animation, known as the substitution splice technique, to produce his seminal work, Le Voyage dans la Lune.

25 years later, Fritz Lang built on the techniques pioneered by Méliès in his revolutionary film, Metropolis. He too used miniature models, but also incorporated something called the Schüfftan process, which involved using a specially made mirror to create the illusion that actors were within the miniature city. Add to that Lang’s ingenious use of light and perspective in creating his dystopian view of a great megalopolis and you end up with a movie that many still regard as one of the greatest ever made. 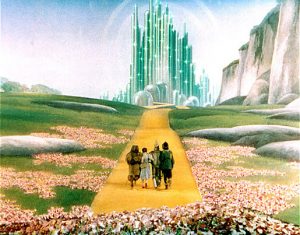 The 1930s saw advances in the use of Matte painting, a technique that created the illusion of vast landscapes and backgrounds in circumstances where the real locations were either too expensive or, more probably, non-existent. In theory, a matte-painted image combines seamlessly with live action to create great vistas – think of Dorothy’s approach to the Emerald City in The Wizard of Oz – and they became such an integral part of movie-making that all major studios would have whole departments devoted to the process. They continued to be used well into the 1990s when digital compositing gradually began to supplant traditional glass matte painting.

For the best part of 90 years, the use of miniature models, stop-frame animation and glass matte painting were predominant in the production of special effects in film. Boundaries were constantly stretched by clever innovation and ingenious refinement but the principles held the same for a remarkably long time. 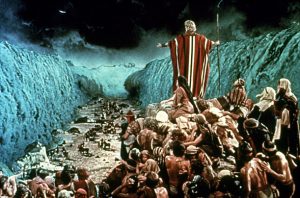 For example, The Ten Commandments in 1956 used Matte painting, rear projection, miniatures and some pretty massive water tanks to produce the iconic scene of the parting of the Red Sea – an astonishing cinematic achievement for its time. 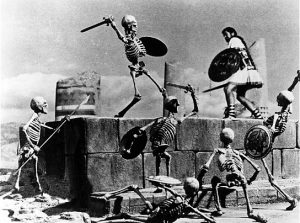 Jason and the Argonauts in 1963 featured a battle scene with life-size skeletons that used new and dramatic stop-motion techniques. 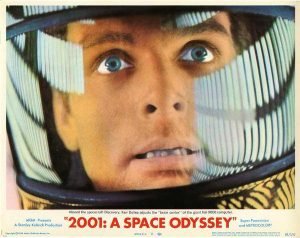 However, it was 1968’s 2001: A Space Odyssey that really saw the art of FX take a great leap forward. Miniatures, were still being used, but the technology now available and developed by the crew allowed for far greater detail and depth of field than was previously achievable. 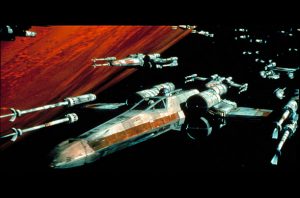 Not long after came the first of George Lucas’ great Star Wars trilogy. (Which weren’t the first three, they were the next three and they came shortly after – but not necessarily preceding – the three that came before the three later ones. Or something.)

As well as improving on many existing techniques, the team assembled by Lucas developed a camera rig known as the “Dykstraflex”, so-named after it’s inventor, effects supervisor John Dykstra. This allowed the creation of incredibly intricate camera movements across matte backgrounds that could be repeated precisely thus giving us the most spectacular sci-fi battle sequences the world had ever seen up until that point. It’s also worth noting that at this relatively advanced stage, miniature models were still being used extensively.

The Dawn of CGI

Then came the dawn of CGI – Computer Generated Imagery – and suddenly anything became possible; although it would still be some time before the old tried and trusted techniques would become completely redundant. 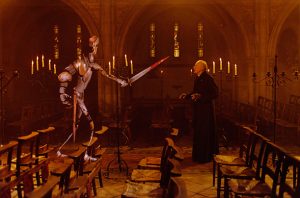 1985’s Young Sherlock Homes is credited with being the first film to create a character using pure CGI in the sequence when the stained glass knight comes to life in order to duel with Holmes. But these were early days and this thirty-second CGI sequence took the best part of six months to complete. 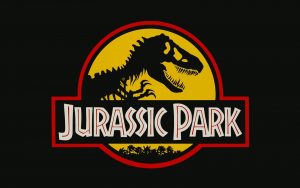 Jurassic Park took developments further in 1993. However, while many believe that in its depiction of dinosaurs roaming the modern-day world, this was one of the first movies to use CGI to its full potential, there are, in fact, only 14 minutes of pure CGI rendered dinosaurs in the film.

The rest were shot using a combination of animatronic models and men in rubber velociraptor costumes – so even at the cutting edge, there was still room for some tried and trusted techniques.

Today, CGI is all-pervasive and some might argue that the pursuit of the special effect has subjugated the role of good, old fashioned plot in the movie industry. But it’s still given us some classic and spectacular movies to enjoy and allowed film makers to let their imaginations really take flight. There are no longer any limitations to what can be depicted.

And of course, now we have 3-D – which deserves a whole article to itself – but that’s for another day. 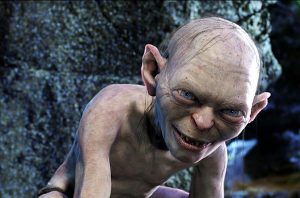 Within all of this lies the humble Green Screen – a simple but fantastically ingenious concept that has revolutionised the way we present moving images from major Hollywood blockbusters right down to our daily weather forecast. The concept of blue and green screens has also allowed the development of motion capture techniques without which we would not be able to enjoy such stunning on-screen characters as Gollum, in Lord of the Rings and the modern version of King Kong.

To read more about Green Screen technology, take a look at our previous blog entry on the subject. And if you want to read more about the evolution of special effects in film, there’s a great interview on Gizmodo with Don Levy, previous senior vice president of marketing and communications at Sony Pictures and founder of Smith Brook Farm, a media and entertainment consultancy.

If you wish to take advantage of one of the best Green Screen facilities in London, look no further than Soundstage Studios. Call us on +44 (0)20 8961 7890 or get in touch via our contact form and we’ll be delighted to chat with you about how we can help make your visions become reality. Well…pretend-reality anyway.